Beyond the bustling colonial capital Colombo, the bucolic hill stations and tea plantations, the Indian Ocean-facing resort town offers some of the country’s best sun-drenched experiences and cultural excursions 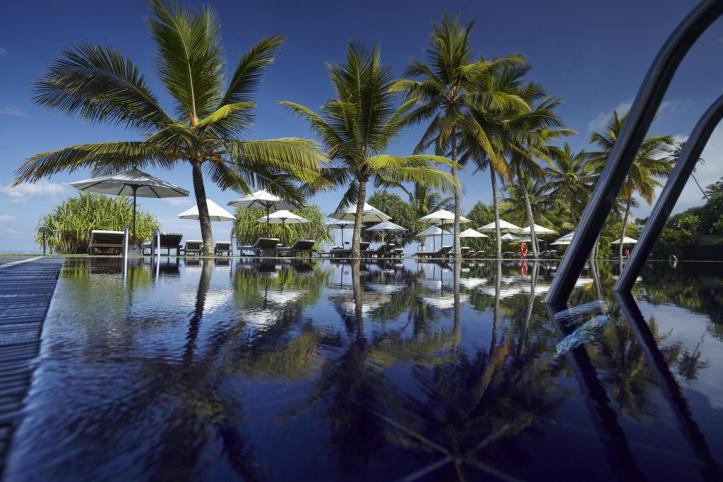 Sri Lanka has slowly come into its own as a global holiday destination in recent times after decades of unrest. Although the pint-sized island nation has long been on the radar of more intrepid travellers, this sleeping giant only really roused in 2019 when travel bible and tastemakers Lonely Planet named it the year’s best country to visit — a decade on from the end of the civil war.

Tourists from around the world are now beginning to experience what those in the know have long championed about the region’s best-kept travel secret. Lush hill ranges strewn with patchworks of tea plantations, a cosmopolitan coastal capital that wears its colonial history with a hint of pride in Colombo and game-rich national parks that house thousands of elephants. The drawcard, however, is Sri Lanka’s seemingly endless stretches of postcardperfect coastline boasting beaches that rival those in Southeast Asia’s — and its northern neighbour India’s — most renowned resort destinations, in addition to some of the continent’s best surf. And if the west coast is the country’s crowning attraction, Bentota is one of its brightest jewels.

Conveniently located roughly halfway between Colombo and UNESCO World Heritage Site Galle Fort on the scenic Southern Expressway route, the town is revered as one the country’s premier coastal retreats. Since its days as an 18th-century rest-house spot for Dutch sailors, and later when British colonialists built a sanitarium here, visitors have flocked to its palm treeflanked shores to soak up the golden beaches and sea breezes.

Nowadays, Bentota is known for its world-class water sports and seafood rather than sanitariums. Only a 90-minute drive from the capital, the resort town’s popularity has surged, as too has the availability of accommodation options. These range from humble beachfront bungalows to five-star resorts. At the upper end of the scale is EKHO Surf, a stylish 96-room property that sits squarely on Bentota Beach’s main stretch only a few bare footsteps from the Indian Ocean.

Operated by the team behind the legendary Galle Face Hotel in Colombo, the resort is part of the EKHO collection of experience-themed properties that dot the country. Guests here can unwind on sun loungers in the manicured gardens eyeing the show-stopping vistas and tropical pools, laze away the day at the Balinese Spa or escape the heat in the plush, wellappointed rooms, many of which feature unobstructed sea views.

Dining options are equally generous. The four on-site restaurants cater to international tastes, including breakfast, lunch and dinner menus at the signature L’Heritage, while Fruit de Mer serves up some of the finest fresh seafood on Bentota Beach. 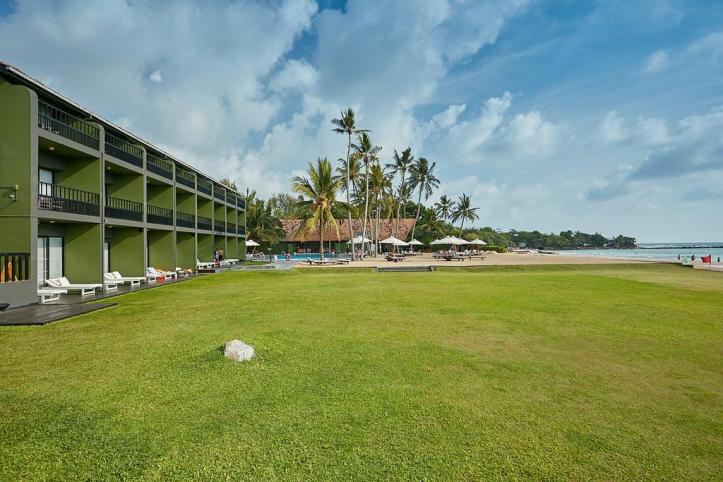 Indeed, the town’s appeal extends beyond the tropical trio of sun, sea and sand. Brief Garden, a lush man-made attraction designed by renowned landscape architect Bevis Bawa, proves a pleasant respite from the sun loungers. A 10-kilometre journey from EKHO Surf, the gardens were transformed over decades by Beva from a rubber plantation into arguably Sri Lanka’s most impressive landscaped gardens. The revered Buddhist temple Kande Viharaya is also well worth a visit. Set atop a hill in the nearby Kalutara District, it features one of the world’s tallest sitting Buddha statues, in addition to a few other curious including the stupa, a bodhi tree and the relic chamber, which is believed to be the oldest structure in the temple. Impressive murals depicting events from Buddha’s life also adorn the walls.

Other popular day trips destinations include the Kosgoda Sea Turtle Care Centre, where guests can learn about the various species and assist with conservation efforts, the local toddy distillery, at which the producers demonstrate their dare-devil skills tightrope walking skills, and of course the UNESCO-recognised Galle Fort. With a history spanning more than 500 years, this is one of Sri Lanka’s most archaeologically important areas and a rare example of a European fortification that features local building styles. Highlights within the historic city range from renovated Dutch-colonial buildings to centuries-old mosques and an ever-growing number of boutiques operated by local artists and designers.

Guests can immerse themselves in the multiple sides of Sri Lanka during a stay at EKHO Surf. From jet skiing and banana boat rides on Bentota Beach to a private tour around Galle, there is something for everyone at this convenient beachfront retreat.

To celebrate the new year, EKHO Surf is rolling out a Beach Getaway Package that includes dinner under the stars on a private beach, 15 percent off selected food and beverages and a 25-percent spa discount. Single- and double-occupancy rooms, meanwhile, start from USD140 and USD165 a night respectively. For more information and to reserve, email at reservations@ceylonhotels.lk or visit https://www.ekhohotels.com/