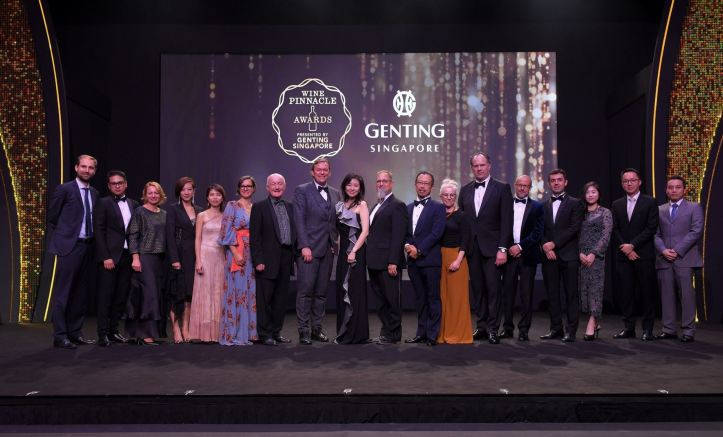 Results for the world’s first-ever nomination-based wine award features a diverse and inclusive list cutting across geography and vintage, while highlighting sustainable practices

Winners of the inaugural Wine Pinnacle Awards, presented by Genting Singapore, were announced at its flagship lifestyle destination, Resorts World Sentosa on 10 October 2019. Out of the 27 categories, the Grand Jury award has crowned Domaine Coche-Dury as the recipient of this esteemed accolade. Celebrating the absolute best of this year’s showing, the Grand Jury award is specially judged and selected by the Wine Pinnacle Awards Committee from among the winners across all categories.

The black-tie award ceremony held at the Resorts World Ballroom was attended by distinguished winemakers, top wine professionals and wine critics from around the world. The exceptional gathering of the international wine community in Singapore for the first time at the Wine Pinnacle Awards also marks the beginning of a new and exciting landmark wine event in Asia which is seeing a growing appreciation for fine wines.

A Celebration of Excellence and Diversity

A nomination-based recognition of wines without restrictions on origin or need for submissions or entry fees, the Wine Pinnacle Awards is the first of its kind in the world, providing an independent platform that allows for greater inclusivity. The awards also honour wineries with sustainable practices, young winemakers, and wines that present diversity across a broad spectrum be they old or new world, young or mature, as well as wines from established regions which are currently under the radar.

“As part of the Wine Pinnacle Awards Committee, it is an honour to be among such an impressive group of wine experts and professionals, bringing together a diverse group of winemakers and wines through our collective expertise and experience. It’s very heartening to uncover wines that are under-appreciated as well as highlighting the very best wines in the world to give them the recognition they deserve for their quality and merit,” shares Ms. Jeannie Cho Lee, Wine Pinnacle Awards Committee member and the first Asian Master of Wine.

“We are excited to be able to recognise and reward those who contribute to this dynamic wine industry. We are learning and already thinking of ways to improve the Wine Pinnacle Awards in the coming years, with a clear goal to provide an authoritative platform to showcase the most deserving wines and wine personalities from around the world,” she continues.

The Wine Pinnacle Awards Committee is comprised of five internationally reputable wine experts namely Ms Jeannie Cho Lee of Hong Kong, Mr Kenichi Ohashi of Japan, Mr Doug Frost of the United States, Mr Oz Clarke of the United Kingdom and Mr Andreas Larsson of Sweden. They were responsible for establishing the nomination structure and formation of a credible jury from different parts of the world, including Asia, the US and Europe, with 33 Masters of Wine and 9 Master Sommeliers among its 54 members. The committee also oversaw the nomination process and ensured its focus on quality and merit. The results are a culmination of the expert opinions of the world’s leading wine professionals, from a total of 1,069 nominations received from the jury.

Votes by the jury were gathered by way of a secure and anonymous online nomination ballot. Each category accommodated up to nine nominations, which were later narrowed down to five in the nomination list revealed in August. The jury were invited to submit nominations in sequence of their preference with each nomination carrying different points. Nominees with the highest points are the winners of their category.

This celebration of diversity and excellence is apparent from the 27 award categories that include recognition towards mature wines that are ready to drink such as Best Bordeaux Wine from 1996 and Best Burgundy White from 2008, ‘Best Organic/Natural Wine of the Year’, ‘Best Recent Releases’, ‘Best Chinese Red’, ‘Best Young Winemaker of the Year’, ‘Black Swan’, ‘Unsung Hero’, ‘Best Friend of the Earth’ and ‘Hidden Treasures’. The crown jewel is the ‘Grand Jury Award’ that was determined by the Wine Pinnacle Awards Committee. The winner of this coveted title was chosen from amongst all the winners from the other categories.

Happening from 11 to 12 October, The GREAT Wine & Dine Festival which is held in tandem with the inaugural Wine Pinnacle Awards will showcase over 400 wines, including some of these award-winning bottles. The festival also has a dedicated zone which features sake breweries from Japan in partnership with the Japan Sake & Shochu Makers Association.

Other than enjoying these wines with gourmet cured meats and cheese from Euraco Foods, visitors can also look forward to a smorgasbord of festival exclusive dishes from RWS celebrity chef restaurants, such as newly-minted Michelin-starred table65, Fratelli Trattoria and TEPPAN by Chef Yonemura, along with a first-in-Singapore pop-up dining concept, Los Angeles’ cult Lobsterdamus known for their grilled wild-caught Maine lobsters.

Wine connoisseurs and aspiring wine aficionados can look forward to a series of masterclasses on 11 and 12 October 2019. The Wine Committee will take attendees through topics, such as Tuscan wines, varietals unique to Japan and Spain, and the difference between new and old-world wines. Jeannie Cho Lee MW will even go deep into the effects of terroir through a collection of Pinot Noirs from around the world. Each masterclass is ticketed and limited to 25 per class.

Public can purchase tickets to the festival for 11 and 12 October (from S$60 per person) with special rates for Mastercard card holders and RWS Invites members (from S$42 per person) at www.thegreatfestival.sg.

Congratulations to the 2019 winners:

RWS is wholly owned by Genting Singapore, a company of the Genting Group. For more information, please visit www.rwsentosa.com.

Four Seasons Singapore Festive Semi #Buffet menu WESTHOLME TRI-WAGYU (THREE CUTS PREPARED IN THREE WAYS)
Fraser Residence Orchard, Singapore
Capri by Fraser, Changi City is a Great Staycation Choice
Capri by Fraser, Changi City is a Great Staycation Choice
MPC Events is a boutique event consultancy founded in 2011 by Singaporean Crystal Chua, and specialises in engaging senior executives and high net-worth clients through meticulously planned hospitality events, conferences and experiences for corporate clients and luxury brands.
SHINE from inside out with Unique Time's REJUVENATE
Orchard Hotel Singapore’s award-winning Hua Ting Restaurant Mooncakes, Mid-Autumn Treasures
@mtssingapore Millions and millions of people have flocked through the doors of Madame Tussauds since they first opened over 200 years ago and it remains just as popular as it ever was. More information on opening hours and tickets at https://www.madametussauds.com/singapore/en/
@holidayinnsgatrium Holiday Inn Singapore, Atrium Restaurant is a halal-certified all-day dining a la carte and buffet restaurant. It serves an extensive selection of International flavours and local favourites. Atrium Restaurant also offers takeaway and delivery at a flat rate islandwide.
@apple Apple Marina Bay Sands, the first Apple Store to sit directly on the water. Appearing as a sphere floating on the iridescent Marina Bay, the store introduces a new and captivating retail experience at one of the most iconic locations in Singapore.
Introducing the Galaxy Z Fold2: Change the Shape of the Future
Minerva Passion Mid-Autumn Festival Mooncakes, they have come together with Chef Ivan Brehm of the one Michelin-starred restaurant, Nouri to make a difference. They aim to make the tastiest mooncakes in town with all-natural ingredients. Using the mix of ingredients not commonly used in mooncakes, Chef Ivan Brehm created a set of mooncakes conforming to traditions, yet fuelled with new twists to create a new taste and design. The boxes are plastic free, using only sustainable and compostable materials. The casual-chic outlook is specially made to match the Chef’s Brehm eclectic mix of flavours.
Together with the award-winning Xin Cuisine Chinese Restaurant, Holiday Inn
Cherry Garden at Mandarin Oriental, Singapore unveils a collection of tea-infused mooncake treasures alongside its crowd favourites to celebrate a joyous Mid-Autumn festival this year. Savour the classic pairing of tea and mooncake with the traditional baked Lugu Oolong Tea with Melon Seeds, an indulgent new creation that combines silver lotus paste with the strong fragrant notes of the fermented black tea, and further complemented with the crunchy texture of the melon seeds. Green tea lovers can look forward to delight in the newly introduced Matcha Red Bean, a lighter rendition of traditional baked mooncake as the earthy green tea flavour impeccably balanced out the sweetness from the red bean paste.
Celebrate this Mid-Autumn festival with Crowne Plaza Changi Airport with heartwarming gifts of traditional baked and locally inspired snow skin mooncakes. This year, the mooncakes are presented in an elegant gift box made from recycled material with floral motifs in a vibrant shade of plum.
Mid-Autumn Festival Golden Moments Mooncakes
Chng Kae Mooncakes 100% pure Mao Shan Wang durian puree, with no added sugar, cream and preservatives encased in a thin chewy layer of snowskin. The blue and white marbling is modelled after the blue-white porcelain wares from ancient times, entirely capturing Chng Kae's traditional-meets-modern values. Order now for exclusive discounts at ChngKae.com #maoshangwang #premium #snowskin #snowskinmooncake #durian #durianmooncake
FOUR SEASONS HOTEL SINGAPORE JIANG-NAN CHUN MOONCAKES SNOWSKIN COLLECTION
BMW i X3 #bmw #bmwx3 #bmwi3 #bmwfan #electriccar #i3 #x3
@holidayinnsgatrium Xin Cuisine #Chinese #Restaurant, Holiday Inn Singapore Atrium Mid-autumn #Mooncakes Festival Promotion , check out the early bird specials at https://luxuryasiainsider.com/2020/07/06/xin-cuisine-chinese-restaurant-holiday-inn-singapore-atrium-mid-autumn-mooncakes-festival-promotion/ #earlybird #midautumnfestival
Loading Comments...
Comment
×